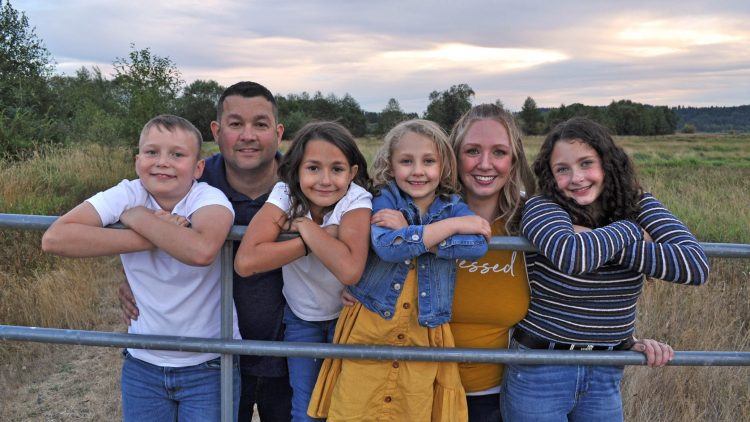 It’s amazing how in one year something you have always wanted becomes more than just a dream, but a calling and journey that has impacted your life far greater than you ever imagined....

Anna knew since high school that she always wanted to adopt.  She dreamed of fostering and then adopting.  When Jose and Anna started dating, Anna was very clear on this dream.  Jose was in the Army and got out soon after they were married.  They decided to stay in Washington to start their family. Two years into their marriage, they had a beautiful little girl, Bella.  At age one, she was diagnosed with a rare autoinflammatory disease.  Anna quit working to focus on her daughter’s health which even involved trips across the United States for medical treatment. Then after 5 years, Bella’s health finally got some answers, and they were told they were more likely to be hit by lightning than to have another kid with the same rare disease.  They had another beautiful little girl, Julieta,  and a year and half later had a third daughter, Emilia.  Julieta was diagnosed during Anna’s pregnancy with Emilia.  And when Emilia turned one, she was also diagnosed with the same rare disease.   So, the ideas of adopting were put on hold.   It wasn’t until about two years ago that all three girls’ health became so managed that their flares were very far and few between.  Jose and Anna bought a home that would fit a growing family, it is a working progress to update and remodel it into their dream home.  But they knew, with the girl’s health great for two years and now owning a home that would fit another child-  the timing couldn’t be better.  It’s hard to explain, but God gave them the sign and Jose was feeling called more than Anna.  His past military role model (when Jose was a private, he was his sergeant) posted their adoption of a young boy on Facebook.  They watched their journey and felt so inspired.  They felt God opening a door….

In one simple call, we learned a lot about Ukraine and knew it was what and where we wanted to adopt from.   After lots of research and talking with adoptive families, we decided to host an orphan this summer as we started the adoption process.  The hosting organization is a missionary program that brings kids who interview and express interest to America for the summer so they can avoid an unimaginable summer for a child. We prayed a lot about this.  We perceived it at it as taking an orphan out of a labor camp to enjoy a summer that most American kids experience.  And in this time, we would see what it was like to add another child into our home.  The hosting organization requires the same training as adoption does and it comes with coaches and an amazing support group.  So, what better way to test the waters.  It was a win-win situation.  That was until we met Illia and realized God had a bigger plan for us with Illia.

On day 5 of hosting, this was the first time we told Illia we loved him when comforting him. It was truly how we felt. He fit like a missing puzzle piece and all 5 of us knew he was meant for our family.  Our love was quick and strong. Our home felt like we had dreamed it would if we were to adopt.  When the summer came it an end, the last week was beyond heartbreaking. Illia stayed up later the last few nights to spend extra time with us.  He snuggled on the couch, and you could see him not wanting to waste one moment of time with the family.  At the airport, so many tears were shed.  So many hugs and kisses.  It was one of the hardest days of our lives.  When we got home, the house seemed quieter and just not right.  Our pets looked for him.  Mia, age 6,  woke up the next morning yelling his name and walking the house looking for Illia.  Julieta later in the day was in Ilia’s bed with one of the dogs crying.   Its amazing how in a few short months God can lead you down a road that opens hearts and changes lives.  Our families’ lives are forever changed. We are so eager to make it feel complete again with Illia home.  And most importantly, bringing Illia home will change his life so he can live it to his fullest potential.

We are grateful for the love and support to help make this wish possible. It's like the old proverb, "It takes a village to raise a child.”  If you feel led to give or donate to our family, we would be so blessed by that. We are using Adoption Bridge in hopes that working with a non-profit will encourage our family and friends to donate as they can potentially use this as a tax write-off. We also like that we don't have to handle any of the money, that it all goes directly to the agency.  We also appreciate your prayers & thoughts for us through this journey.

So excited for your family. We love you all <3

Love you guys! I'm praying Ilia will be home with you soon... Forever. Much love!

Very lovely story. I have 1 biological child - 4 additional children that God put in my care, whom I love to my core. So 5 children (4 girls 1 boy) now all adults. I now have 15 grandchildren, all whom are loved beyond measure. God put us together and we couldn't be more happier, it was meant to be. Your story is just starting, what an amazing life you are blessed to have. God is good.

Great story and wish you well on your adoption journey.

Love your story and thanks for sharing. God bless you and your family.

We love you guys! Praying for each of you, and sweet Illia. God will provide a way, He is good!

Praying this will encourage you in your mission of hope ...