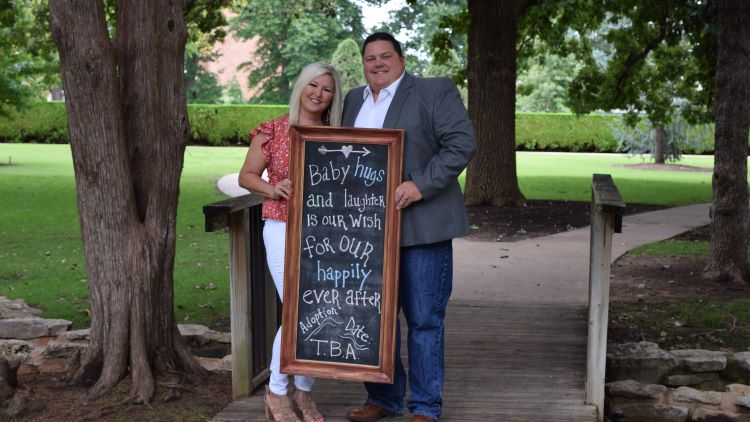 Before my husband and I married, we talked about wanting to adopt and how we felt that God had a plan for us to build our family through adoption. We discovered after we were married that we would be unable to have children together due to an emergency ablation surgery which solidified our belief that God had a plan for us.
We began planning for a future adoption and researching agencies, attorneys, costs involved and talking to families who have adopted. I am fortunate that my life has already been blessed with cousins who were adopted, and I spoke extensively with both my cousins and their parents about the impact that adoption has had in their life. You see, my husband and I are educators and want to educate ourselves in every way possible to provide the best for the baby we adopt, so we read every article or book that we can and speak to people we know who have experienced the adoption process.
With our attorney’s advice, we held off signing with an agency for 1 year. We composed our “Dear Birthmother letter” and purchased mailing lists for every OBGYN in Oklahoma, where we live, and in Texas. We then sent a letter to each doctor to pass on to a mother that might be in a situation in which she was looking toward adoption. We did get contacted and was so excited to be finally getting our long-awaited baby, but after talking with our attorney, we found it to be a scam. We were devastated but not deterred. We had faith that God had a plan for us.
With much prayer, we continued to pursue adoption through Nightlight Christian Adoption Agency in Tulsa. We spent years saving and had saved a significant amount and was ready to sign with an agency. We were so excited! But things happen in life that are unplanned and life changing. My mother passed away in May of 2018 from an illness she had been diagnosed with for some time. Then 3 months later, my father unexpectedly passed away from a massive heart attack. They had been married for 57 years.
After many months, we continued our journey, followed by numerous fundraising attempts. In fact, we have been able to make the first $9,000 payment. This journey has been challenging and discouraging at times, but we know that through God all things are possible, and we will continue to pray and seek the Lord’s guidance.
As mentioned earlier I was in education as a principal, and after much prayer and discussion, my husband and I decided I would resign and take a part-time job at a children’s museum so that I could work from home in anticipation of adopting. This has been an adjustment on our finances, but God has been faithful in providing what we have needed and continues to do so. We will continue to pray that God will lead us on our adoption journey and help to build our family. We would be grateful for any financial assistance which you would graciously give us.