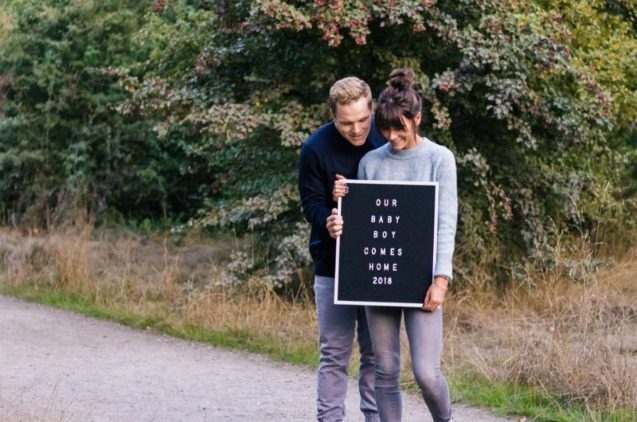 Eight years ago, my husband and I joked about how we both wanted 7 kids!  We were sitting on the hill behind his elementary school.  We were dating and head over heels in love.  Yes, seven was ambitious and we were blissfully unaware of the challenges we would face to become parents, but we knew that was something we wanted in our futures together.  Six months later we were married!

A couple of years went by with nothing.  We were busy in school and getting our first jobs so it wasn't too concerning.  By our third year of marriage, we were with a fertility clinic investigating what was going on.  We did every test in the book, tried all of the quirky, embarrassing tactics to try and get pregnant and still there was nothing.  Three rounds of Inter-Uterine Insemination all failed and that left In-Vitro Fertilization (IVF)as the obvious next step.  We weren't so sure about it and needed some time.

Our sixth anniversary came and went.  We had moved to Seattle and decided to go for our first round of IVF, but to continue with our clinic in Utah. For the next 8 months I was back and forth to Utah for IVF.  My egg retrieval was so hopeful.  We had 13 healthy embryos as a result and implanted 2 right away.  It ended with a biochemical pregnancy-meaning it was never a true pregnancy and only showed as one due to the high levels of medication I was on.  We did a second transfer as soon as we could with 2 more embryos.  This one felt different and we were so sure it had worked.  I was feeling amazing and had all of the symptoms of a normal pregnancy.  And then one day, after having lunch with my girlfriends and talking about when my due date would be, I doubled over in pain. I drove myself to the OB, hitting my leg the whole time so I wouldn't pass out for how bad it hurt.  Jackson held my hand as the nurse did a 45 min. ultrasound without saying a word.  My doctor advised us most likely this was an ectopic pregnancy and dangerous to my health to wait much longer.  I was still holding out hope that this was just a cyst or a cramp and unrelated to a healthy pregnancy.  He gave me 2 hours to have bloodwork done to find out.  As soon as it was confirmed that there was not a baby, I was in the ER and was administered methotrexate to terminate the embryo growing outside of my uterus.

Halfway across the world as our hearts were breaking, our baby boy was coming into the world.

For years we had been having an every-so-often thought that we should look at adoption.  It was a new idea to me because no one in either of our families had been adopted or had adopted.  Throughout our treatments for fertility, especially near the end, I kept having this thought that there was a child out there who needed us as much as we needed him. In fact, as I waited for the results of our second transfer I told Jackson that I wanted to adopt even with the healthy bank of embryos that we had.  We had a choice to make and the feeling to adopt was growing stronger every day.  We decided we didn't want adoption to be our last resort, but rather a choice we intentionally made.

It was on our seventh wedding anniversary that we had a call with a woman who was about to go pick up her child from Albania.  It was the country we had been considering ever since we brought up international adoption.  Jackson had served a 2 year LDS mission there and it's been a special place in our hearts.  Her call changed our life that day.  As soon as we hung up, we knew for certainty that this was the path we wanted to take to begin our family.  And so it began...

Since May 1, 2017 we've worked so hard to get our dossier (paperwork) together.  We have enjoyed the time of refelction together and the lunch dates at our notary's office, the post office and the Department of Homeland Security.  Something about it all has felt so peaceful and so right.  And then we got a call...

A boy.  A photo.  Our hearts exploded.  We love him so much and still have so much to do and so much time to wait, but we love him.  His photo goes with us everywhere and his picture on the fridge is the first thing I would save if our house caught on fire!  He is an answer to our prayers, a gift from our Heavenly Father.  I know now what God had intended for me and Jackson all along.  But, we couldn't have known it as surely as we do if we hadn't endured what we had these past few years.  I don't see infertilty as a trial we went through, but rather an opportunity that has led us to adopting our sweet little boy.  I wouldn't trade our story for anything.

We are thrilled, over joyed and anxious to meet our son.  Please know that anything helps and that your prayers are just as appreciated as any donation you can give.  (We are hoping to get to bring him home early 2018).

Thank you for the love, support and prayers we already have had along the way.  We are truly blessed by the goodness of our friends and family.

What a lucky little boy to have you guys as parents! I’m so happy for you! ❤️

Love you guys and pray for you!! So excited for your family!! 😘

So happy for you! You will be wonderful parents!

We are so happy for you and your little boy!!! What a blessed family he coming to. He is already a lucky little guy to get such amazing parents. Xoxo

So happy for you! You will be wonderful parents!

so excited for you- lots of love & prayers

We love you guys and wish you all the best!!

Love you both so much! Cannot wait to meet this precious boy!! We are So beyond happy for you guys!

We love you guys! ❤️

We are so excited for you! This little boy will be so blessed to have you as parents! Love you and we are praying for you!

Jacks & Em, We love you guys so incredibly much. You two are so amazing and are just amazed with how faithful and strong the two of you are. We can't wait to meet your sweet little boy and snuggle the crap out of him! Love you guys! - Sam & Jess

Your story is so powerful ! As someone who has been through years of infertility and rounds of ivf and the heartbreak of miscarriages , I'm just do happy for you to finally be able to have your little boy! Congrats!

Congratulations guys! We send our love!

We love you guys! Can't wait to meet your little guy!

This little baby is blessed to get the best!

We couldn't be happier for you two and we love all three of you! Cant wait to meet Arlo someday!

We are so excited for you!! Can’t wait to meet Arlo! We love you all tons!

I love you both! Congratulations

Love you guys so much!

We're so very happy for you. Here's to some of the best people we know -- parents at last!

So so happy for you guys!

Sending love and prayers! The Christensens