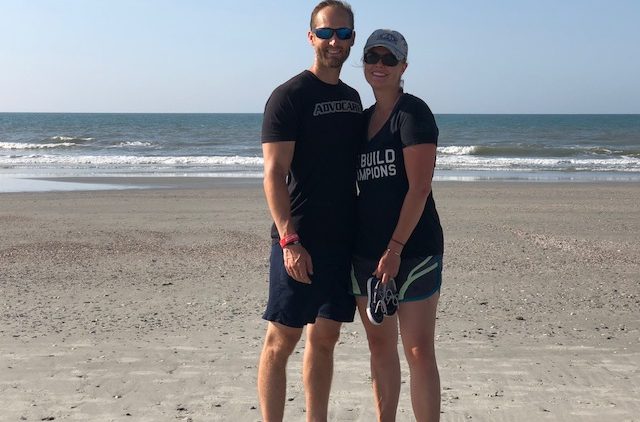 The discussion of adoption began in 2005 (in the midst of our engagement) when I, Kathy, began to present with some women’s health issues.  I asked Brandon if he was certain he wanted to marry me even if I could not biologically have children.  He said “yes” and we agreed that if that were the case we would want to grow our family through adoption.

By the grace of God, we were able to conceive in 2009 and I gave birth to our first biological son, Grafton, on March 26, 2010.  In Fall of 2010, we were saved and committed our lives to Christ.  Suddenly, adoption began to take on an entirely new meaning.

In fact, someone recently asked me if we named our son “Grafton” because we were “grafted” into God’s Kingdom.  Wow!  We had not even seen the prophetic beauty of his name until that moment.  But that’s exactly what had happened.  God used Grafton to humble us, to open our eyes to our sin and to reveal our need for Jesus Christ as our Savior and Lord.  As we handed our lives over to Him, God graciously adopted us into His forever family as heirs.  We were grafted into the tree of eternal life no longer being defined by our “do’s” but rather by His “done” on the cross.

The call to adopt for His glory and purpose was birthed.  A year later, our eyes were opened to the horrors of the global sex trafficking epidemic.  Our church connected us to a ministry that was creating homes and hope for girls who were aging out of orphanages in Moldova (in 2011 it was the sex trafficking capital of the world).  Aged-out orphans were some of the most vulnerable to be trafficked and sold for sex.  We wanted to be a small light in the darkness.  Moldova was not open for international adoption at the time, but Russia was.  Church friends connected us with an Alabama agency that had a Russian program.

In January of 2012 we submitted all of our application paperwork to Children of the World to begin our adoption journey.  And a journey it has been!

We were home study approved and assigned a region in east Russia called Vladivostok.  We began compiling necessary dossier paperwork and completed online training and a weekend-long required training in Atlanta to prepare.  As we were waiting for our child match, Russia closed the door for families from the United States to adopt from Russia.  Our adoption pursuit was abruptly terminated.  We were devastated, not only for our family, but for the thousands of children that this decision negatively impacted.  We had friends who had already visited their child (3 trips to Russia were required prior to adoption) and spoke promises of adoption to them.  And now, those promises would be broken.

We prayed and financially recovered from this first adoption attempt.  Then, in 2013, we got exciting news that Moldova had re-opened its doors for international adoption.  We believed God had closed one door to open this one (the very country that opened our hearts to international adoption in the first place).  We had to change agencies and began the process with Carolina Adoption Services (CAS) that year.  We were once again home-study approved and were in the process, again, of gathering all of our dossier paperwork.

In February of 2014, while attending the Created for Care adoption retreat, I suddenly began to feel ill.  I came home exhausted and discovered I was pregnant!  Per CAS guidelines, our adoption had to be put on hold.  10 weeks into my pregnancy I was rushed to the ER to discover that I was in heart failure due to pulmonary emboli.  The clots were covering 90% of my lung capacity.  Through the miraculous healing of our Almighty God and a great medical team our second son, Samson, and I got healthier as the pregnancy progressed.  At about 7 months pregnant, we received a call from CAS informing us that Moldova was becoming too complicated and that they were no longer going to continue their program there.

We were full of mixed emotions.  I was deeply grieved again but also so grateful for the life God was growing inside of me.  Through God’s Sovereignty He had protected our family in more ways than one and was giving us time to heal and transition from a family of 3 to a family of 4.

In the Fall of 2017, Brandon and I began praying about adoption again.  We had devoted the last two years of our lives building a foster care ministry in Montgomery, Alabama.  While we were open to foster care, we also knew that we had been specifically called to adopt.  We asked God to show us how he wanted us to do that: through foster care, domestically or internationally.  We were truly open to His plan.

In March of 2018 God moved our family to Rock Hill, South Carolina.  A few weeks settled in, we began to look at our options again.  I picked up the phone to contact Department of Social Services to inquire about becoming foster parents.  The phone call wouldn’t go through.  It startled me and I believe it was God’s way of forcing me to yield to His plans, not my own.  I began searching online for private agencies that supported foster families.  Nightlight Adoption Agency pulled up.  I called them and had an hour-long conversation with the most patient and kind woman.  She listened to our story and presented our adoptions: foster, domestic, adoption.  Towards the end of the call, she added, “We do have a waiting child program.  I could send you the list of children who are waiting and that might be an option as well”.  I said “sure” but was truly unconvinced that it would lead to anything.  I had scoured waiting children’s lists both domestically and abroad and had never had the “ah-ha” bond and connection that my fellow adoptive mommy friends had experienced.

Until Chloe.  I skipped over her at first.  I was simply “dutifully” skimming through the children (pretty heartless right?!).  Maybe it was out of fear that God would send us internationally again (could we even afford that with us paying for Brandon to go to seminary?).  Maybe it was out of fear that the majority of these children had special needs.  Either way, those reasons were all rooted in fear and were not from God.  God whispered to me and convicted me of my sin.  And then He began to whisper her name (the name the adoption agency used for her anyway) . . . Chloe.  I began to hear it everywhere.  And then, God performed another miracle.  He led me to His Word where I saw her name.  And then, separately, God sent Brandon to that same passage 1 Corinthians 1:11.

We began to pray and knew that God was calling us to pursue Chloe.  He has graciously given us almost eight years of sanctification and spiritual maturation to equip us for this call.  He will continue to give us strength, wisdom and love.  He has gifted us two healthy, vibrant boys who are going to be the absolute best big brothers to their little sister.  He has surrounded us with brothers and sisters in Christ near and far who have adopted children from all over the world and who have all varying abilities.

He has given us the eyes and the heart to see Chloe for who He created her to be; and not to define her by her diagnosis of Down Syndrome. He has given us the courage to try again and to travel across the globe to grow our family.  We are trusting in His plan, in His provision and His purpose.  And, so here we are seven years from God’s first call on our lives to adopt, in pursuit of Chloe.