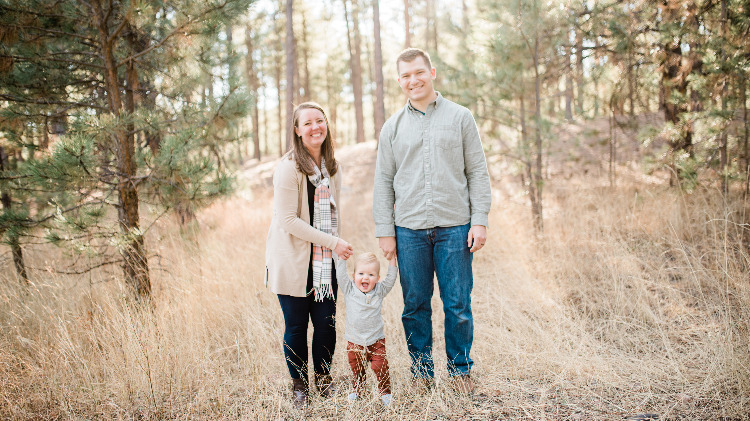 We, Chris and Jenna, have both felt called to adoption pretty much our entire lives.  When we had the "kid" conversation while we were dating, we both agreed that whether we had biological children or not, adoption was in our future.  After we got married in August 2016, we decided to start trying to get pregnant starting in the new year.  We were unsuccessful for a full year when Jenna had some blood work done, and it was discovered that she was perfectly healthy!  We had no explanation for why we weren't able to conceive, so we chalked it up to "not meant to be".  We didn't pursue any further testing, because we had agreed early on that IVF was not an option for us, so why put ourselves through that?  We had decided to try to conceive a child first, because we thought that was how we were supposed to do it.  Adoption never left our minds.  It was never a second-best option for us.  It was always our first option.  So we decided, why wait?  There was a child out in the world who needed a loving family, and we were a loving family that wanted so much to have a child.

In March 2018, we were at a Christian concert hosted by Compassion International, when we both felt God's call to adoption at the same time!  Compassion International was doing their call to sponsor a child, when we looked at each other and realized that our call was to ADOPT a child.  All we needed to do was say YES, so we did!  After that, we spent a lot of time researching the various adoption routes and agencies.  We found ourselves torn between adopting from Colombia or India, so we prayed on it fiercely.  Our church has flags of other countries hung around the inside of the sanctuary, so every Sunday, we would pray on each flag, asking God to direct us to where He wanted us to go.  One Sunday, we both agreed- India was where we were called.  The following October, we submitted our application to Nightlight Christian Adoptions to become prospective adoptive parents in their India program and were quickly approved!  We were SO excited, SO eager (and still are)!  However, God has shown us, it's all in His timing.  He knows which child He wants us to love, so we trust that He will lead us to our son or daugther at the right time.

Along the way, God revealed his plan for us to have more than one child.  We were blessed with a surprise pregnancy and gave birth to our biological son, Sawyer, in October 2019!  This beautiful detour has delayed our adoption process a bit.  We knew we would have to do a home study update once he was born, so we delayed the completion of our dossier and immigration registration.  We were told by Nightlight that India wouldn't place us with a child until our biological son was at least one year old, so that put a further delay on our process.  Well, now that our son is over one year old, we are ready to keep moving!

We are ready to register as a waiting family with our child's birth country.  We have already been I800-A approved by USCIS.  We are using AdoptionBridge to help us through these next steps- registering our dossier and accepting a referral.  Any amount donated to our adoption fund helps to get us one step closer to the child we are meant to love!  Sawyer is ready for a sibling, we are ready for baby #2, but it's all up to God's timing.  He has a perfect plan in place, and we trust in Him.

Thank you for following God’s call! Thank you for allowing us to help in this small way. We look forward to watching the journey to your next child. May God supply your needs through His church body and community. For those that can’t adopt help those who can. Blessings!

I really believe that God calls us to care for His precious little ones - of all ages, all situations. My husband & I have never felt called to adopt or foster but we do think God has blessed us monetarily in order to come alongside of Him in His work & purposes. I am thanking God that people who love Jesus - like you!- are answering the call God has placed on their hearts to care for His little ones. God bless you in His perfect timing.

Getting closer to you little one! Blessings to your sweet family!

May the One who calls you strengthen and encourage you! Blessings and peace to your family!

At about age 10 I told my Mom I wanted to have twins & when we turned in our adoption paperwork - God had twins waiting for us!! We are so excited for the child of God, He has already planned to be part of your family! It was really special to get to visit with you on the phone about adopting from India. Your family has been on our hearts ever since. The gift we are giving also includes money from Grandma Joy & my friend Dana. We are all praying for you as you walk through this process. We have been SO blessed by the gift of adoption & know that you will be too!

Getting closer!!!! Praises to our Heavenly Father!

Praying for your family!

So excited for your family! God is so good!