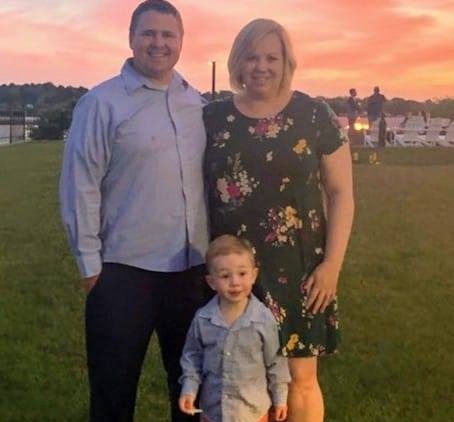 We are Chris and Meredith. We are a married couple of almost 5 years who have a brilliant little boy named Weston. Our little boy has been a true miracle from God. We want nothing more than to complete our family.

Shortly after getting married in Dec of 2014, we became pregnant naturally. Almost three months later we had a miscarriage that needed a D&C to resolve.  About 1 month after this D&C, we became pregnant again, with Weston. Chris was 34 and I was 37.

Having both grown up in big families we knew quickly after having Weston that we wanted more children.  We started trying again quickly.  On Weston's 1st birthday, March 16, 2016, we discovered we were pregnant! Sadly, we lost the baby two months later. We became pregnant 5 more times prior to seeing a fertility specialist. Most of the pregnancies were lost between 5 and 8 weeks. Each pregnancy brought hope for expanding our family, but each loss brought heartache.

In Jan of 2018, we began working with a fertility clinic. They tried three rounds of IUIs but none worked. We even transferred to a different fertility clinic and tried another round of IUI, this time with injectable medications; however, this didn’t work either. We knew that our odds were low; very, very low, but were still willing to try; we still had HOPE.

After 1.5 years of medical interventions and thousands of dollars spent, (Neither Chris or I's medical insurance cover any of these treatments, or medications for becoming pregnant), on IUIs, medications, doctor's visits and travel we became pregnant on our own! Yet again, HOPE was still alive!

At 7 weeks pregnant, at my brother's wedding, we lost yet another baby.  This led to an emergency hospital stay, medical procedures, out of pocket costs and yet another loop around the roller coaster.

We then met with our, fertility specialist and  we were told that IUIs, which we have tried already, will give us a less than 5% chance at conceiving each time.  IVF is not an option due to poor egg quality and low reserve.  (Likely due to my age, 40, and the recurrent miscarriages).  Our best chance (and it’s a good one) for a pregnancy will be through embryo adoption. So we adopted four embryos, did two transfers, and neither worked!

This journey has led us to adoption! WeSWe are already home study approved! SupportoSupport looks to different to each and every one of you, but we will take it in whatever way you are willing to give. Please share your love, kind thoughts, donations if you can, but most importantly, please PRAY FOR US!

Love you and pray that your beautiful family will have a sweet addition in the near future!

Pray that this works for you and you can add to your beautiful family.

Your strength and persistence inspires me. Congratulations on making the first step to a new journey! All my love and well wishes!

Wishing you both the very very best!!!

Praying for you guys and for a little brother or sister for Weston!! Love you!!

Meredith, Everyday you inspire me. You, Chris and Weston are three of the best humans I know. Your ability to gracefully fight for your dreams, keep your spirits high and continue to uplift others is truly unmatched. We love and support you on this journey.

My heart breaks for all you have gone through. You know I am here if you need me. I’m so sorry we can’t do lire. Good luck and lmk if there is anything else we can help with!

So excited for you!

It’s not much but I want you to now you have my support and I am sending you so much love to your family.

Proud of you and excited for you all!! :)

Positive energy and prayers to you ....you deserve all the happiness in the world...♥️♥️♥️ Liz

We are hoping and praying for you both!!

We are so empathetic to your story. Our family came to be unconventionally. With medical intervention, support, luck, prayers and God’s plan we have a full nest. Wishing the same for you and happily support you both Meredith and Chris.

I see how much you two love Weston every single day and know you deserve to have the opportunity to shower another baby with your affection. Wishing you the best of luck as your journey continues!

What a wonderful gift you guys will bring such love and happiness to a child , my aunt Fostered over 200 hundred children , and adopted 1 ! It takes Special people like your family , so happy for you guys!

Keeping you all in our hearts and on our minds. Sending love and prayers!

.We’re praying for you. We love you. Aunt Shirley & Uncle Mike

You have given so much to Sam and all OVV kids Meredith! We pray for a healthy baby for you both! Sam wouldn’t be who he is without you! Lots of love!

I hope you reach your goal of raising money to complete your family. You deserve it after everything you and your husband have gone through.

Hoping all your dreams come true. Wish I could do more!????

Sending you guys our love and good vibes❤️ Love, Ethan and Whitney

We are praying for all of you!

Hearts and Hope and Love!