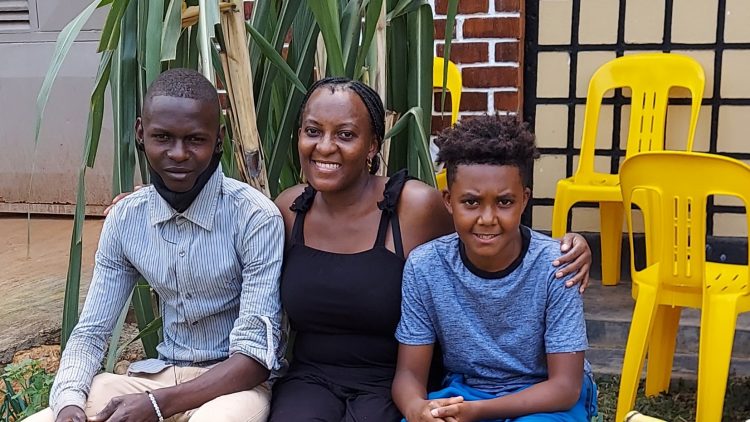 Galiwango Junior Gift was born on April 1, 2006, in Uganda, East Africa.  Junior lost his mother due to alcohol intoxication just a few months after he was born. Junior’s father, also an alcoholic, passed away in 2014 when Junior was only 8 years old. These traumatic circumstances threw Junior into a life of homelessness, hunger, and abandonment.

On Valentine’s Day 2013, the locals found Junior living on the streets and brought him to the village Chairman and his wife who have since been his guardians under their roof. Through their love, he gradually changed into a loving, responsible, and most importantly, a God-fearing boy! He is innovative in creating things and loves electronics. Junior has been able to complete his Primary Leaving Exams and would like to be an engineer.

I am biologically related to Junior and have been supporting him financially with his school needs and necessary living expenses. I would love to adopt him and give him a chance just like I was given a chance having been adopted myself. It is my dream to adopt Junior and have him join me in the US with my son, Paul William Tendo. Unfortunately, I have a short window of time to complete the adoption process as Junior will soon turn 16 years old, and the financial burden is heavy. I don’t want him to miss out on this great opportunity which will change his life forever. We invite you to join us in this journey. Any donation through Adoption Bridge will be deeply appreciated.

Given the fact that I was adopted, I would love to give him an opportunity to be able to change the world, and there is no better place for that than in the United States.  As the saying goes, “One good turn deserves another.”

Phillippians 1:6 "He who began a good work in you, will carry it to completion"

“To be of service to others, is your rent for a place in heaven”. Thanks Namata

Jackie you are a beautiful woman on the inside and out. God Bless you.

May God bless u all.

This is so brave of you Jackie :)

All the very best Jackie!

Am humbled. God bless you more Jackie and Mr Tendo .

Very proud of you Jackie. God bless you & your plans for this boy.

May God richly bless and reward your big heart Jackie. May he make your dreams come true.

I wish yoy both the best.

Great to meet you Jackie.. wish the three of you the best of luck!!

Jackie your greatest contribution to the kingdom of God may not be something you do but someone you raise.

Asking God to multiply the funds and do a miracle for this boys life! God bless your family!