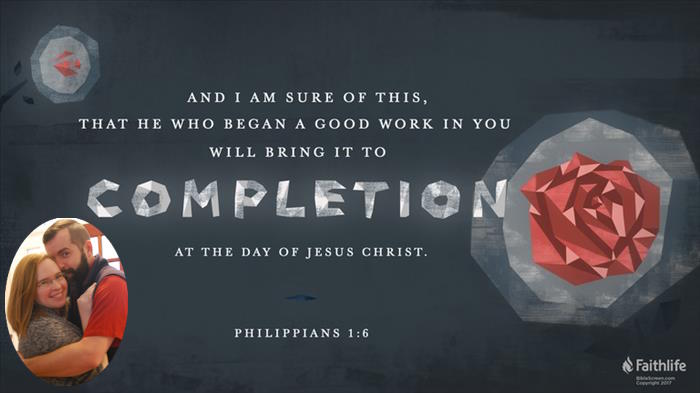 Dianna and Jeremy are the epitome of opposites attracting. Different family backgrounds, interests, and personalities collided when they came together. Now, after 10 years of marriage, they want to share the overflow of love which ties them together with a child.

Dianna and Jeremy have experienced the adoptive love of God in a real and personal way since being adopted by Him as His children. Dianna and Jeremy chose not to have children the "normal" way. They have both been advocates and supporters of orphans in the past, so they chose to take the next step by sharing their love and family with a child who has none, just as God has done by giving them a heavenly family.

There are countless children in the world who are in need of a home, and Dianna and Jeremy want to provide that home to one of those children (or two if they are siblings), but first they needed to narrow the search. As first time adoptive parents, they researched and prayed about the right place to look for their future child. This search lead them to China. Adoption from anywhere is costly, and there is very little help to be found for those expenses. After living frugally, sacrificing many things they wanted, and saving as much as possible, they always knew that they would have to rely, at least in part, on the generousity of their family and friends to make bringing home a child a reality.

Please join them in fundraising (since they also are continuing to set aside money) and praying for their unknown, future child who, for now, is known simply as Little Bear.

Praying for you both!

We're so excited to send a little help towards your adoption path. You two will be fantastic parents. God has something amazing planned for you!

Enjoy your journey and enjoy your little one. We hope your adoption is as blessed as ours was.

Praying for your family

Nathan and I are praying for your family as you wait. It’s a crazy, beautiful thing to adopt and we wish you all nothing but the best!

Cindy and I are very, very excited for you! This journey is a special gift from God.

We’re excited you’re willing to take this journey! Praying you can rest in God’s timing as you preparer to grow your family!

I love you brother.

God is good! So thankful for this new season and gift!

We can't wait for our new grandson to join our family!

With joy in my heart I offer this portion to be used for the Lord's glory in the life of the petite Puskas which we are soon to meet. May He be a person who loves and honors God with his whole being knowing he in turn has been loved first by God. Bless y'all! So excited!!

Praying for your whole family through this journey. -Lauren

Children are a blessing. Can’t wait to see him.

So excited for both of you!

Praying for the day our great-nephew comes home to his forever family! God bless you all! ????

Praying for you both and that sweet little boy! I'm excited to walk this journey with you all at North Hills and look forward to hearing more updates!

God has preached everything for you guys ???? Excited got you!

I love him already!!

We are so excited for you both. Love Ed and Dorothy Starnes

Pat and I send our love with you to China as you travel to bring Levi home.

So excited for y’all!

May God continue to bless you as you pursue His heart! We are so excited for y’all!

Andre is very excited about this adoption! I'm sure you already know that. With his adoption, we were given money from surprising places and we have been committed to be used as that surprise for others. We wish you a joy filled journey. The road will have a few hills and valleys but will be well worth the trip. You go into adoption with others telling you that what you are doing for this child is such a wonderful thing, but if you are like our family, the two of you will be the ones blessed beyond belief. Be patient and don't expect perfection. My soul still lights up at the memory of the first 6 months of taking Andre to the grocery store (he was 2). The elation that beamed from his face at the realization that there was that much food, and that we were taking some of it home - well, it was humbling for me, and there was no way you could leave Bi-Lo depressed. You will find times that absolutely clench your heart in a way you have never felt before. I know we have. The Newtons