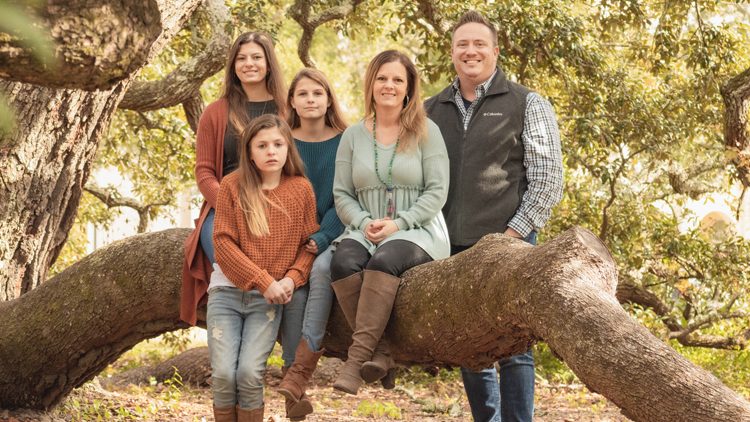 We are the Hamby family, and we are adopting "Carlo" from Colombia! He is a 12-year old boy who loves dogs and the beach, and we just happen to have both! We can't wait to bring him home, but we need your help.... A little about us: We married in December of 2016 after dating for almost 2 years. I (Tonya) had three daughters who "adopted" David immediately, and David, having never had children of his own, took to parenting like a fish to water. Due to medical issues, I am unable to have any more children, so we knew we were not able to have children together under "normal" circumstances. We discussed surrogacy, but with the girls being so much older neither of us really felt led to start over with a newborn, so we waited. We attended adoption awareness meetings at our church, but were daunted by the expense and the mountains of paperwork! We let it rest for a few years, until some other family members went through fostering children they eventually adopted. We walked through the process with them, and a few other friends who have adopted, so it was always close by in our minds. During Christmas Holidays of 2021, we had an opportunity to host for four weeks a 13 year old boy from Ukraine with medical issues, and knew we were being called to adopt. We initially began the process of adoption for that particular boy, but just before we were able to file our official paperwork with the government (it was all filled out, in a packet with a check, ready to go!), Russia invaded Ukraine and everything halted. We were no longer able to continue, and we were devastated. It took us several months to decide what to do, and finally decided that ONLY IF we were able to agree on one of the waiting child profiles after scrolling through all of them separately, then we would redirect our broken hearts to pursuing another child. We each began to search through the profiles separately, and we both kept coming back to this one beautiful boy who has a smile to light up an entire room! We knew right then that God hadn't let go of us or released us from our calling to adopt. We already had three healthy daughters, now aged 20, 14, and 12, and we so desperately wanted a son! David says: The love for others is a command that we are obligated to follow, albeit imperfectly at times. Having been blessed by being adopted by three stepdaughters, I feel it is tine to expand that love by adding a son into our family. Scripture (Ephesians 1:5) tells us that God’s chosen elect are adopted and grafted into the children of Israel. If not for His choosing us first, we could not possibly choose to follow or serve Him. Adopting a child is the same situation, in that a child must be chosen and loved unconditionally if they are to be adopted and benefiting from the new family dynamic. Just as God defends the fatherless (Deut. 10:18), we should care for those that are unable to defend themselves (Prov. 31:8; Isaiah 1:17; James 1:27). The journey of adoption is tedious and at times tenuous, but we know that God gives us the strength to endure (Isaiah 40:31). As I am now well into my 40s, I see the desire to have a child to bestow our family name to (Ephesians 1:5), and I greatly desire to give the best of who and what I am to a son (Psalms 68:5-6; Acts 7:21). Adoption is a humbling way to serve our great God and others that He has created, for we also can serve the biological parents of our hopeful adopted son, albeit indirectly in our situation (Matt. 25:40). The ultimate goal is to provide our adoptive son with a happy, loving, and God-centered family life that will allow for him to grow and thrive as God sees fit.

Sending love to you all on this journey!

Hello cousin, I hope this helps in your adoption process for Pasha. I’ll keep praying that he’s safe and that everything works out. Please keep me posted. Love, Karen

I can't wait to meet him!

Matthew 25:40 And the King will answer them, ‘Truly, I say to you, as you did it to one of the least of these my brothers, you did it to me.’