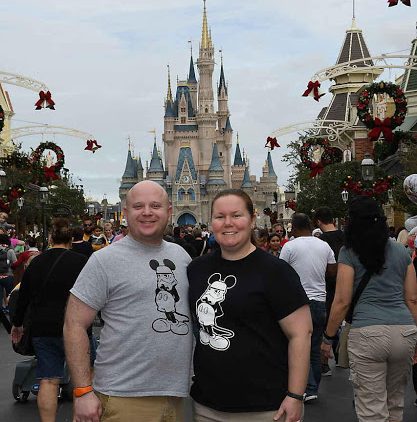 Inquire about this family

Thank you for considering us as loving parents for your child(ren). We cannot imagine all the emotions you must be going through in considering an adoption plan. We admire your strength and courage in making this decision for your child(ren) and we hope this profile will help you get to know us and what kind of parents we hope to be.

We are William and Meredith. We met on Match in the summer of 2010. We found that we had a lot in common including watching football and baseball (even though we root for different teams).  After 8 months of dating we became engaged. William had planned on asking me to marry him with the song “Marry Me” by Train but like all well planned out ideas that song would not play but I did say yes anyway. We had a small church ceremony with family and friends in December 2011. Due to unforeseen circumstances we have not been able to successfully conceive naturally and with IVF so the door to adoption opened sooner than expected.

William is a member of the United States Army. He has been in the Army for 10 years and plans on serving until retirement at 20. William graduated in 2008 from Auburn University (War Eagle!) with a degree in Civil Engineering. He is working on getting a Masters’ Degree in Geo-Enviromental Engineering from University of Missouri Science and Technology. William has five sisters and one brother (two sisters and his brother are adopted). In his free time he has recently taken up woodworking and has completed several projects.

Meredith is a Museum Specialist working with the United States Air Force as a civilian. She has been working with the Air Force for 10 years. Meredith graduated from the University of Central Florida (GO Knights) with a degree in History in 2007 and a Masters’ Degree in History in 2009 from the University of West Florida.  Meredith has two older brothers. In her free time she loves quilting and has made several quilts for our nieces and nephews.

We currently own a two story home in Colorado Springs, CO. William loves to garden and grows vegetables during the summer time (he mostly does it for the pumpkins).

We thank you for looking at our profile and photos and hope to meet you.

We are represented by Nightlight Christian Adoptions. If you want more information about us or would like to meet us, please contact Nightlight at (970) 663-6799.